The 9-year-old is growing up. She used to play with Barbies. Now she’s the class treasurer of her West L.A. elementary school. She plays girls volleyball, paints her nails and likes to challenge herself on Minecraft.

The girl, as well as her parents and school administrators, agreed to share her story to show how they are grappling with a situation that more and more schools are facing.

The U.S. Department of Education released guidelines Friday to help schools understand how federal law protects the treatment of transgender students on matters such as bathroom use.

The experience of the girl, identified using her first initial, “T,” to protect her privacy, provides a number of lessons, among them: how to train staffers and designate “safe” people on whom a student can depend. Teachers and principals will want to know how to deal with notes like the one that slipped out of T’s homework folder one day: “You’re a boy not a girl get it throu (sic) your head.”

California law reinforces the rights of transgender students to be treated as the gender they identify with, whether in bathrooms or on sports teams. A few other states, including North Carolina, are battling the federal government in an effort to restrict both transgender students’ and adults’ access to these spaces.

There is no official count of the number of transgender children in the Los Angeles Unified School District. But there is a clear sense among those who study gender issues that, nationwide, people are coming out as transgender earlier than in the past.

Doctors at Children’s Hospital Los Angeles saw about 40 transgender and “gender nonconforming” youths a decade ago, says Dr. Johanna Olson-Kennedy, medical director of the Center for Transyouth Health and Development. Now, she says, the center sees about 600 transgender patients between the ages of 3 and 25, T included.

T is normally a confident and chatty third-grader. But discussion of “the note” turns her pensive as she sits in the middle of her bed in a sleeveless orange dress, fiddling with “Liony,” a bright green polka-dot stuffed animal. 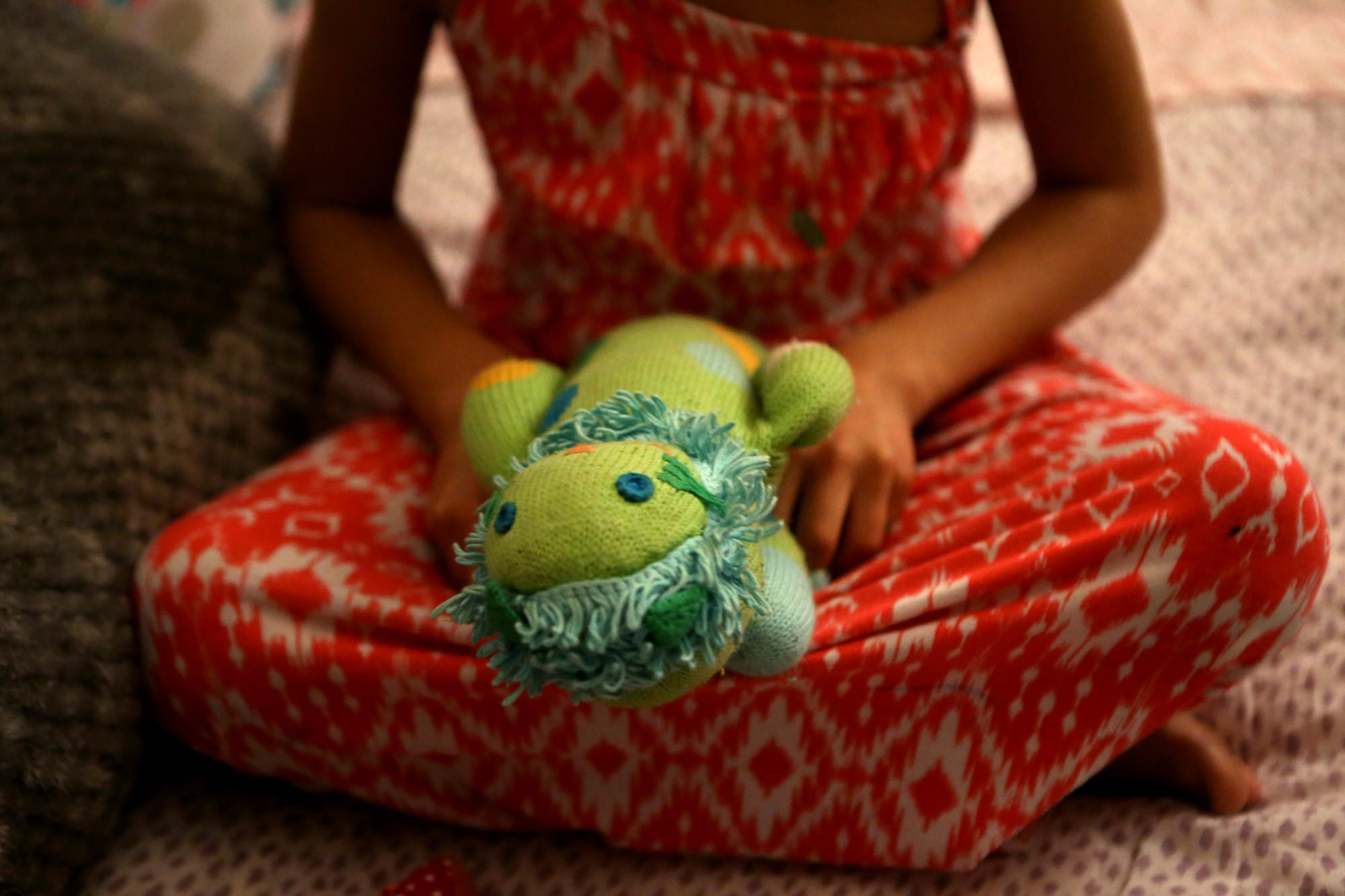 “I felt really mad and sad,” she says. Her voice softens. Her head drops. “I feel like a girl, not a boy.”

After T found the note, her mom told her that the student who wrote it is probably insecure, that the note was a reflection on them and not T. They laughed about the misspelling.

T is the first openly transgender student in the school, and her parents and the school’s principal had already met to prepare for such problems.

The school investigated but couldn’t identify the student behind the note. So the teacher held a class discussion about bullying, cowardice and acceptance.

‘I wanted to be a girl one’

The note is one of the very few incidents that have made the girl feel singled out. Both in and out of school, T is self-assured.

She flies around the volleyball court so quickly that one team member’s father calls her “Kite.” Off the court, she’s affectionate and talkative.

But sometimes it’s hard to know what she’s thinking, her parents say, because she’s so eager to convince them she’s safe.

When T says that “everything’s great,” her mother knows to gently nudge her to continue. On occasion, the mother has found, T is actually thinking about how much she dislikes her penis because it reminds her of why people think she’s a boy.

When she was born, the box for “male” was checked because she emerged from the womb with biologically male body parts. She won’t decide whether to change her body until she’s older. She does, however, assert her femininity in other ways.

As a toddler shopping for costumes, T wanted to be a fairy or cheerleader or witch. On play dates, she hung out with girls in play kitchens. T’s mom remembers when she realized it wasn’t just a phase.

T was 4 years old, cradled in her lap. The mother had always enjoyed having her nephews around. She explained to T how excited she had been to learn she was pregnant with a boy baby.

“I wanted to be a girl one, Mama,” T said through quivering lips.

The most common question T’s parents get is why they are letting her transition so early — why not wait until she’s older?

With that in mind, T’s parents started saying “Yes.”

Yes to the sparkly cupcake shirts from the girls section at Target. Yes to the Barbie Dreamhouse.

Still, it was a fine line. Initially, T’s girls’ wardrobe stayed home. Her parents allowed her to wear sparkly tops to kindergarten, but only paired with pants or tights — a rule they used to introduce the subject of bullies.

After T went to bed, her parents would spend hours online, researching what it means to be transgender. They were afraid that she would feel isolated because she didn’t see anyone else like herself.

When T was 6, her dad showed her a 2007 video of Barbara Walters interviewing Jazz Jennings, a transgender YouTube star.

“I have a girl brain and a boy body,” Jennings, then a child, tells Walters.

Jennings shows Walters a picture she drew of herself, crying because she can’t wear a dress to school.

In her journal (which T labeled with strict instructions not to read), T’s mom found a picture that T had drawn of herself wearing a purple dress, with long hair.

Her parents knew what they needed to do — which is not to say it was easy.

“You definitely go through a mourning period for the boy you thought you had,” T’s mom says. “At the same time you’re mourning, you’re excited because your kid is so happy to be themselves.”

Adults may begin to dress differently, act differently, present a different version of themselves at work. For children, school is usually where they show who they are to kids their own age — who, by definition, are just beginning to wrestle with ideas about what’s socially acceptable, what’s “normal.”

T’s transition at school was gradual.

As a second-grader, she came home on the night before a disco-themed after-school dance and said that she wanted to wear a dress to the party.

T often changed into skirts and dresses when she came home, and her parents had been waiting for the day she’d ask to wear one to school.

Before the dance, T changed into the outfit she’d longed to wear: A black-and-blue, almost floor-length dress, framed by bright pink spaghetti straps. Her father shot a photo. She’s beaming.

That evening, she gripped her dad’s hand tighter and tighter as they walked down the hallway to the auditorium. When she finally joined her friends, her dad backed away and stood with the other parents, proud but nervous, he recalls. 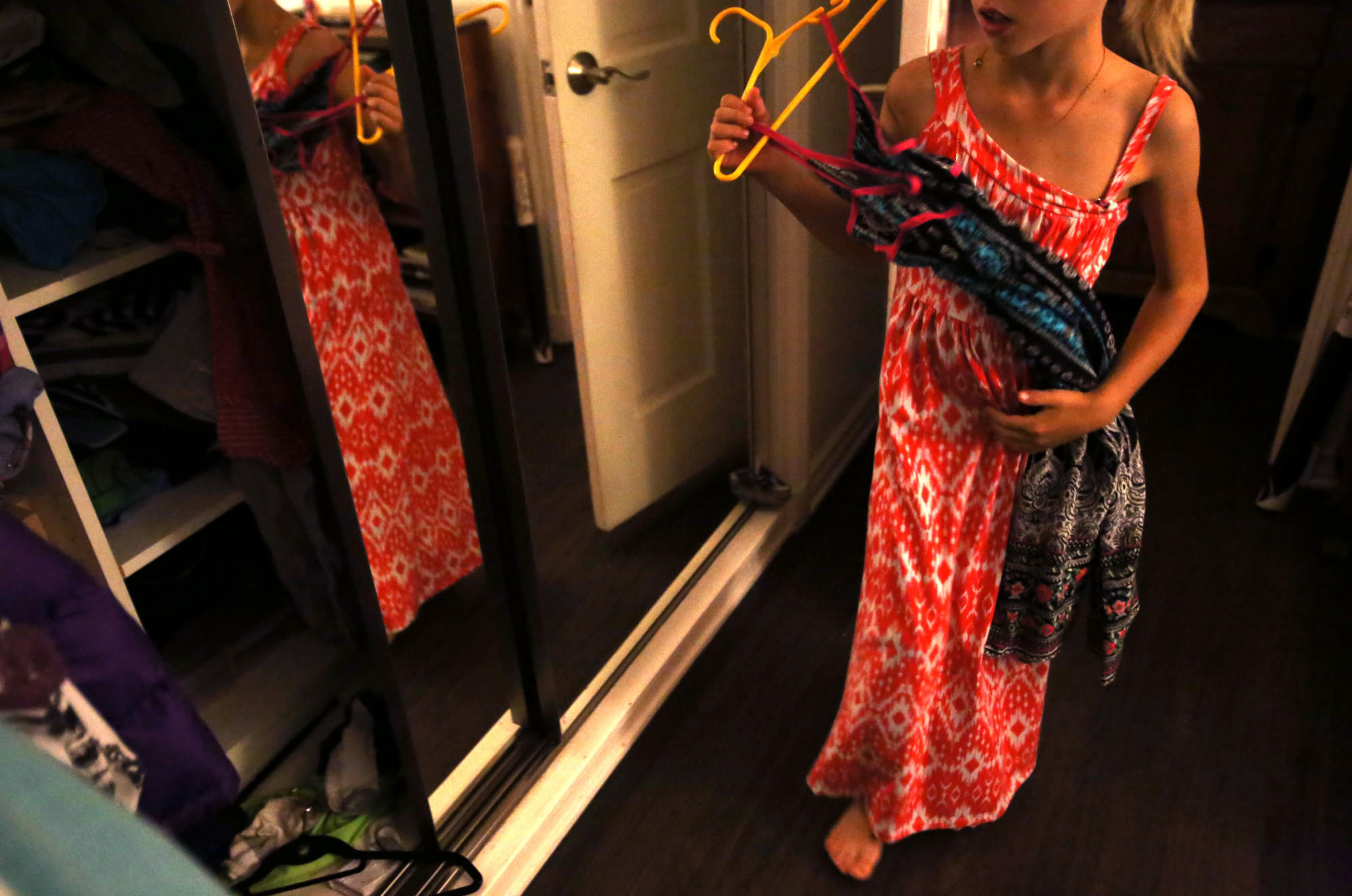 T and her friends danced under the disco ball, joyfully tossed and kicked a swarm of multicolored balloons and gathered in small groups to giggle as 8-year-olds do.

“She just wore what she wanted to wear and everyone accepted that,” T’s mom says. “That was sort of her green light.”

T started wearing dresses and skirts to school and using the nurse’s bathroom.

But she was still “he” to the school.

T’s mom recalls the child whose birth certificate read “male” telling her: “Next year in school, I want to be a she and a her and a sister.”

These days, teachers and students refer to T as “she.”

When another student’s parents had a problem with her using the girls’ bathroom, the principal was able to point to district policy and California law to affirm that students have the right to use the bathroom of the gender they identify with.

Gender aside, T is a fashionista who rocks her cheetah-print vest and leggings one day, and a sparkly T-shirt covered by a growling, glittery tiger the next. 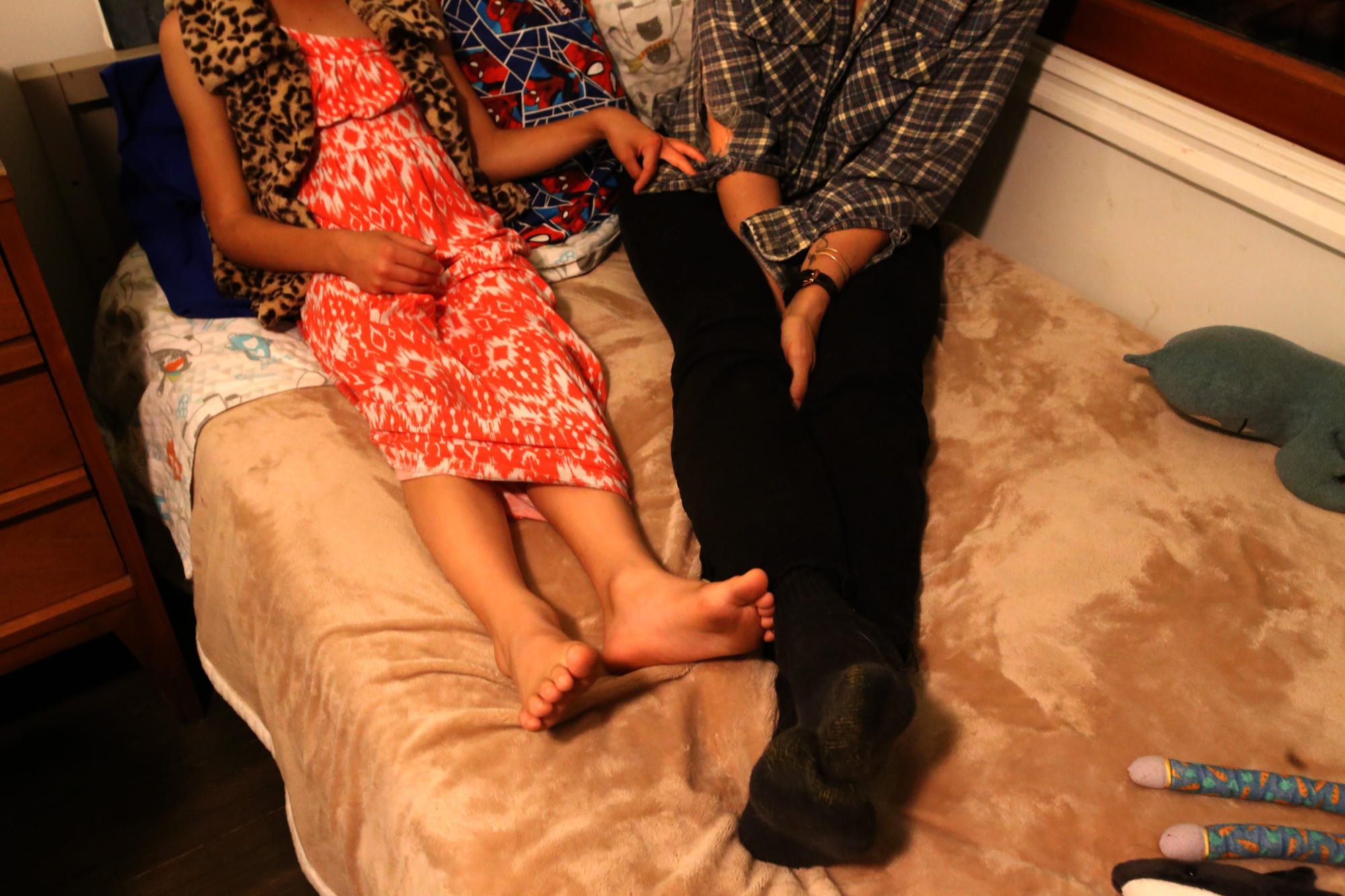 Some transgender children choose to switch schools when they transition, to avoid the comparisons people, especially 8- and 9-year-olds, might make between their past and future selves. By staying in her school, in the same classroom and with the same teacher, T retained her support system and her friends.

But she also has to address the inevitable confusion.

One friend asked T if she was a boy or a girl.

T said she was a girl.

“But you were a boy last year,” the friend said.

The friend asked what that meant.

The next day, the friend came back and said that she and her grandmother had done just that. Now they both know what transgender means, she said.

A third-grader in transition

It’s 6:10 p.m., and T sits at the dining room table doing homework. Her blond hair is tied into a ponytail to show off the reindeer earrings she recently bought. She grips a pencil with one hand and drums her fingers — nails painted dark blue — with the other.

Volleyball practice starts at 7, and she’s in a hurry.

There’s a poster above T’s bed of the college where she wants to play, and she can recite volleyball rankings by heart. Her mother played in college, and her sister plays competitively in high school. Now it’s a part of T’s identity too. 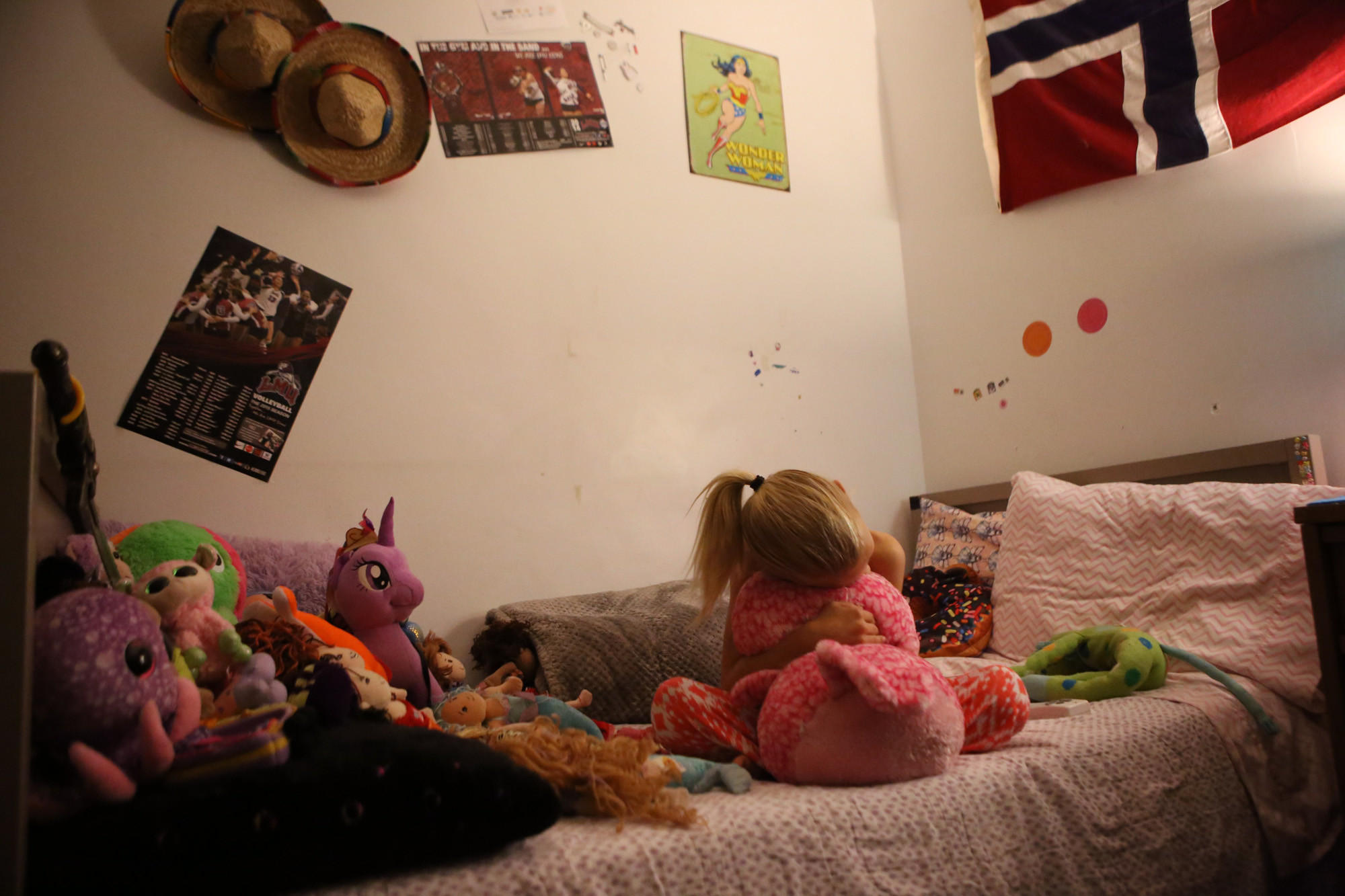 T’s favorite color used to be pink: the color she associated with being a girl, the easiest way to assert her femininity.

As soon as the world stopped overtly challenging her sense of being a “she,” T embraced the complexities of girlhood.

T’s favorite color now is blue. She often ditches the skirts for tights or basketball shorts so she can run around at school more easily, or wrestle her brother.

Her mom calls her a tomboy.

Her dad calls her a warrior princess.

She calls herself a normal girl.